The Woman on the Motorcycle 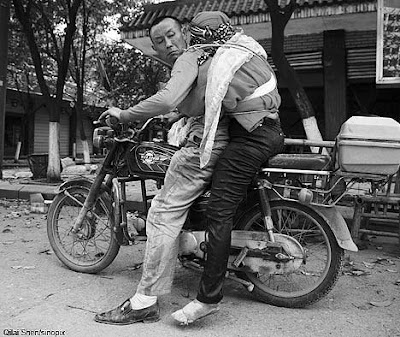 ©Shen Qilai/Sinopix
This photograph has haunted me ever since I first saw it. It caught my eye at the hairdressers one day as I was waiting for my turn, lazily looking through crumpled newspapers for something to pass the time.  As I couldn't read the text I thought at first that it was a happily married couple, obviously fond of each other because of the way the wife is holding onto her husband so tightly. Then suddenly I realized that she was dead and that the man had tied his wife to his back to keep her from falling off the motorcycle. I went icy cold and couldn't stop staring at the picture, at the same time embarrassed because everyone around me had obviously seen the picture too and had been discussing it. I asked the "little boys" (the guys who wash your hair) what was going on and all they said was "He's taking her home".
When I saw the photograph two weeks had passed since the Sichuan earthquake and I was still stunned by the enormous tragedy that  had occurred and by the fear I had felt during the earthquake. I'd seen countless photographs of horrible mangled buildings, piles of small children crushed underneath houses, a lone foot in a high-heeled shoe sticking out from underneath a boulder that was so ludicrously big it seemed like a crude joke in a cartoon. All of them had moved me to tears but when I looked at them I knew what I was looking at, I knew what had happened to them. I was unprepared for the woman on the motorcycle.
A few weeks ago a friend asked "Have you heard about the guy carrying his dead wife?" I sat bolt upright. I had been thinking about this picture for almost ten months and wished that I had torn out the article from the newspaper. I had no idea that the picture was so famous. I thought perhaps I was the only one who had reacted so strongly and that the photograph was only one of many hundreds of earthquake images that each and everyone could win a prize in a photojournalistic competition. How wrong I was, the photograph had gone out all over China and the world and was famous. It was actually a color photograph: the woman is wearing a bright pink jacket that immediately grabs your attention. You can see clearly how her arms hug her husband, but you also see that she is slumped against his back, strapped tightly to him  and that her socks are full of blood, her feet hanging just above the ground. The husband is looking back at her with a frown on his face. Sorrow, worry,  shock, disdain?
This is the problem, the dilemma, the sheer power and the magic of a photograph. It can sway the viewer in so many ways, in so many directions. The viewer is then left to interpret it in her own personal way, from her own personal experiences. The first reaction one has to a photograph is often difficult to dislodge. At first I didn't want to hear what I now found out about the couple on the motorcycle. That the man actually was considered an unpleasant character, that he was forced by his in-laws to collect his wife on his motorcycle, that they wanted him to take his responsibility for her; that he was so unpopular no one wanted to help him, that he neglected his father, had considered divorcing his wife (she gambled too much and had been playing mahjong when she died), that they were actually incompatible, fought frequently, and that he had already remarried, only six months after her death. Or maybe (as he was first portrayed by the national media), they loved each other very much, they were devoted to each other, he had gone to collect her body to take her back home and had dressed her in her favorite pink jacket; that yes he had found love again but that he thought about his first wife everyday and honored her memory. The newspapers had called the image "a husband's final ride home with his wife".
The earthquake killed indiscriminately. The media however chose to "spin" the picture in a certain way, first in one direction, then in another. I saw only the image and never knew the "story" until later. In the end does it matter who the people in the photograph are or what kind of character they have? What do you think? All we actually know for certain is that the body on the motorcycle is dead.
Posted by Ingrid Booz Morejohn at 4:12 PM 3 comments: Links to this post 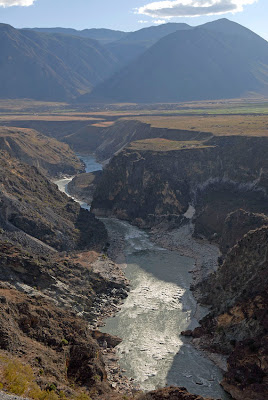 Eastern end of Tiger Leaping Gorge (Hutiaoxia), Yunnan. The gorge has ended here, at the point where it curves north and skirts the Daju Plain. In the far distance there is a ferry crossing which will take you over a relatively safe section of the Yangtse River, where you can then climb up to the escarpment and continue on to Daju and Lijiang or other destinations.
Posted by Ingrid Booz Morejohn at 1:44 AM No comments: Links to this post

The Haba Mountain Range and Jade Dragon Snow Mountain Range, Yunnan, China, seen from pass leading into Zhongdian - Shangri-La. In between these two mountains runs the mighty Yangtse River, creating Tiger Leaping Gorge, one of the most incredible trekking areas of China.  ©Ingrid Booz Morejohn
Posted by Ingrid Booz Morejohn at 1:39 AM No comments: Links to this post 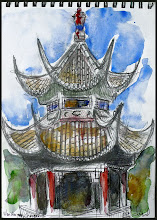 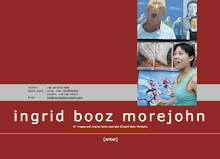